Though I try to resist picking up every “collection of insect factoid” book that gets published, I couldn’t resist grabbing Wicked Bugs: The Louse That Conquered Napoleon’s Army & Other Diabolical Insects by Amy Stewart. Unlike most factoid-books I own that celebrate the wonder and glory of invertebrates, Stewart’s book is a small collection devoted “…exclusively to the dark side of the relationship between nature and humans.” The collection contains a hit parade of all the least-loved insects, arachnids, and other arthropods that have caused humanity untold grief: Mosquitoes, bullet ants, chigoe fleas, tse-tse flies, mites, kissing bugs, and even a few that were new to me, such as the Paederus beetle and Phylloxera. Though many of the stories are tragic and gruesome, Stewart’s writing never becomes scaremongering. There is no sensationalism, and many of the entries (such as those about the brown recluse), seek to dispel myths and fears by presenting accurate information.  But even in those entries Stewart manages to tell delightfully twitchy tales on how insects and arthropods truly rule the planet with an iron tarsus. 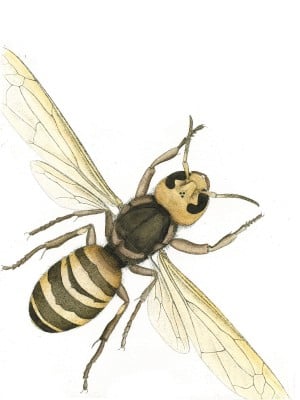 Speaking of presentation, the book is gorgeous, using the same format as Wicked Plants. The Victorian-inspired cover is laced with entomological filigree, and the faux-distressed pages are filled with the beautiful etchings of Briony Morrow-Cribbs. Morrow-Cribbs also has images of her work on her site, where they made even more gorgeous with color. (I would also like to call attention to Morrow-Cribbs’ tantalizing series of books and wunderkammer– a shame the images are so small..!)

The book is great fun, but don’t give it to anybody on the fence about insects- they’ll never leave their house!