For July 4th I went adventuring with friends in Mendocino, CA, where late rains have kept things green well into Summer. On a hike in Van Damme State Park, we stopped by a bridge to watch for fish, birds, and of course insects. When my friend Dan pointed towards the stream and yelled out “Look! It’s poop that’s moving!”, I knew instantly what he would be referring to- caddisfly larvae! But when I leaned over to have a look, I was surprised by the sheer size of them! I quickly scampered down to the stream, and grabbed one of the chili pepper-sized larvae minding their own business on a rock. I’ve seen caddisfly larvae in the wild before, in California and Michigan, but these big ones were new to me. After a moment of holding it, the delightfully spidery arms of the pupae slowly emerged from its case, to see what was going on:

Caddisflies are insects that are vaguely related to butterflies and moths. Unlike other insect larvae such as mayflies and stoneflies, caddisfly larvae undergo a complete metamorphosis (holometabolism) with larvae, pupae, and adult. The adult looks like a smallish and often drab moth, and doesn’t feed, living only a few weeks to mate.
The larvae are completely aquatic, and being a slow-moving target, construct cases out of silk and objects from their environment. The type of case varies with species, and also the kind of materials present, such as rocks, leaves, sticks, or shells. Not only functional architecture, caddisfly cases are works of art!

Here are three of the caddisfly larvae I found, their owners hunkered down deep inside:

(I placed them back in the water afterwards)

The small rocks, many of them translucent quartz, fit together perfectly, like a jigsaw puzzle. Each rock is carefully selected and placed, held together strongly with silk.  The case itself serves not only as protection for the larva, but also as a cocoon for the pupa. The case is cast off once the adult emerges, and swims to the surface to fly.

Several artists have been inspired by the artwork of caddisflies, most famously Hubert Duprat, a French sculptor who raised caddisflies in tanks filled with gold flakes, pearls, and precious stones. The insect then selects the ones it wants, creating its home out of . Thankfully the Leonardo article where I first read about these works is viewable online. The resultant creations are fantastic, but I find their original cases to be far more enchanting and inspiring. Here’s a small selection of some natural beauties. 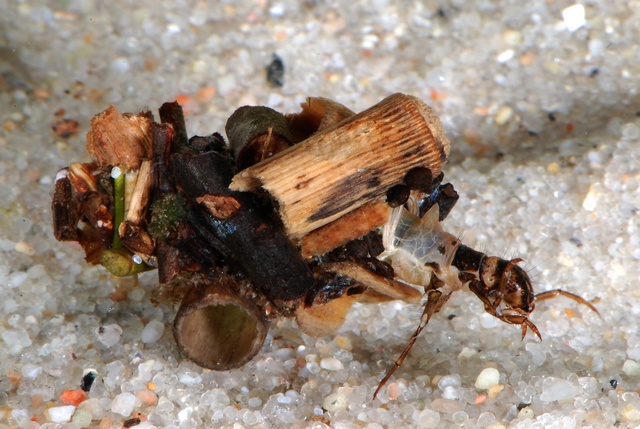 I’ll probably find excuses to post more caddisfly-related stuff in the future. I haven’t realized how much I adore these creatures.

One Response to House Beautiful