If there’s one vernacular name that drives me crazy, it’s “Bug”.  An ancient word still in use today that can refer to an insect, spider, woodlouse, centipede, lobster, bacterium, computer error, or a pug/Boston terrier mix. Or just possibly, it refers to an actual bug. You know what that is, right? Here’s a picture to help you:

Whoops sorry no bugs there. There’s beetles, butterflies, wasps, a grasshopper, a fly and a big tarantula. But no bugs. At all.

What’s even worse is popular books about invertebrates written by naturalists use the term terribly loosely, just because it’s a word people recognize. Here’s the cover of one of my favorite photo-reference books, a giant tome with an unfortunate title: 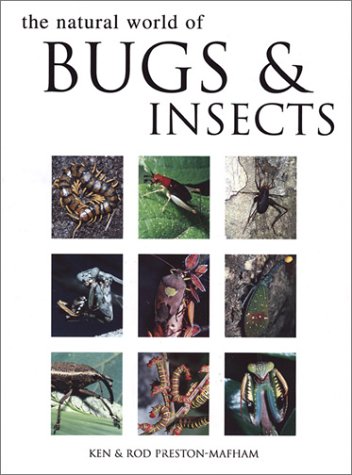 Here it seems to indicate that “bugs” are somehow different then insects, and the authors use the term loosely throughout the book to denote arthropods that aren’t insects. Or possibly arthropods in general. The only non-insect on that cover is a centipede, by the way.

THIS is a bug, people. And it’s an insect:

Ain’t it pretty? Unfortunately many of them are kinda shaped like beetles and eat plants that beetles eat and fly  badly like beetles, so people get confused. But instead of wing covers that have a line down the center like this:

“Bugs” instead have their wings folded. Unlike beetle’s wing covers which are entirely solid, Bug wing covers are “half” solid, often the ends being membranous (transparent). This earns them the name Hemiptera, which means “half-wing”, which doesn’t narrow it down at all, because of course cockroaches and praying mantids have folding wings, right? And those scamps are not Hemipterans OR beetles. So what’s distinctive about order Hemiptera? It’s all about the straw:

Instead of large chewing mandibles to chomp with, Hemipteran mouthparts have evolved to become large straws, to pierce and suck the juices of plants, tree sap, hapless insects, animals, and (in the case of bed bugs) you. From ambush bugs to backswimmers to waterstriders, Hemipterans are a huge diverse group, encompassing an giant suborder called the Homoptera, which comprise treehoppers and cicadas, aphids, and even scale insects.

Certainly entomologists did not just assign a huge order of insects with such a generic word. But somewhere along the way Hemipterans got stuck with the short end of the etymological stick. How did Coleopterans luck out and get their own term “beetle”? Maybe it was because enough Hemipterans already had the common names (like “Assassin Bug” or “Shield Bug”) that taxonomists decided  to Just Go With It Because People Seem To Love Calling Everything A Goddamn Bug.

Alex Wild at Myrmecos (whose post inspired mine today)  has a lovely and succinct image for folks who get confused.

Alex Wild breaks it down for you.

And to make matters worse, “True Bug” has been used to refer to the sub-order of Hemipterans that are the most ‘beetle like’, the Assassin Bugs Shield bugs, which used to be their own order, called.. Heteroptera. Now they’re all under one larger order, but the confusion lives on, and now I at least have this post to send to people who ask me “what that bug” is.

One Response to The True Bug Blues