At some point I just got tired of stinging his crotch

I recently nearly completed the game Deadly Creatures for the Wii, possibly the only game where the main character is a tarantula and/or scorpion. But at some point, I confess I just got weary of crotch-stinging. 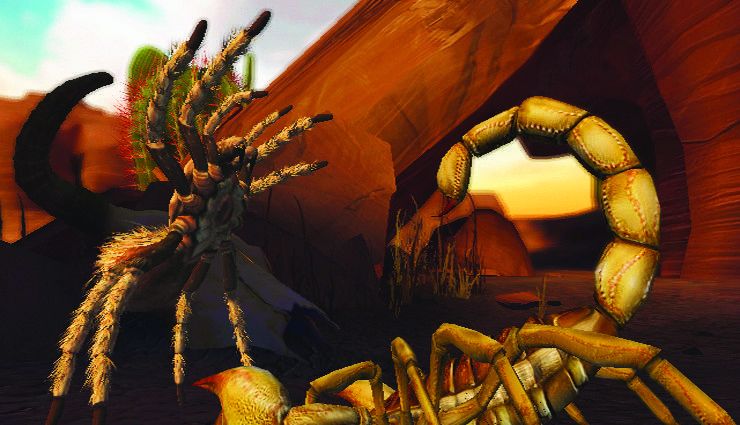 Tarantula has come to kick ass and chew crickets, and she’s all out of crickets.

Though humans show up from time to time, the entire game is told from the perspective of these two invertebrates, switching from tarantula to scorpion every other chapter. You get to spend hours crawling through abandoned junkyards and desert tunnels, getting into graphic fights with lizards, snakes, bombardier beetles, tarantula hawks, mantids, and other testy creatures.

Mostly, though, it’s a lot of walking through tunnels.

Which oddly for me is the most soothing part.  Wouldn’t you love to crawl around like a tarantula or scorpion? I know I would! I spent many happy hours just doodling around, crawling up and under things, admiring the somber environments and well-crafted animations of all the invertebrates.  Each protagonist has their own battle moves, and by shaking the Wii remote like a spastic maniac you somehow are able to perform brutal finishing moves on your opponents.

I never really enjoy combat in games- I’m happiest exploring virtual worlds, not having to slay things for points. Which of course is the main goal of Deadly Creatures. The entire game is sadly like one of those real-life Japanese Bug Fight cage matches that I find so reprehensible and cruel. I keep expecting to hear one of those macho Animal Planet announcers blathering on how X-treme it all is while I’m stabbing rats in the back, their blood temporarily “staining” the camera. Ew.

Remember those humans I mentioned? Their story only vaguely intersects with the world below. Mostly they serve to shake things up, or provide a little dialogue in an otherwise wordless game. But after offing countless nasty beasts, wouldn’t you know it, at some point you have to battle a surly human too.

Which is really where my patience ended. How long must somebody endure a cut sequence of  a scorpion crawling into Billy Bob Thornton‘s pants, over, and over, and over? Isn’t there some sort of game-designer crime on the books that says you can only foist the same cut-sequences on a player so many times?

After 6 tries I finally threw in my Deadly Towel and watched the end sequence on YouTube.  Where the ending just.. ends. Oh well.  It was at least sufficiently buggy up until then!

But at least this strange game taught me a few things: