And the Guldbaggen goes to… 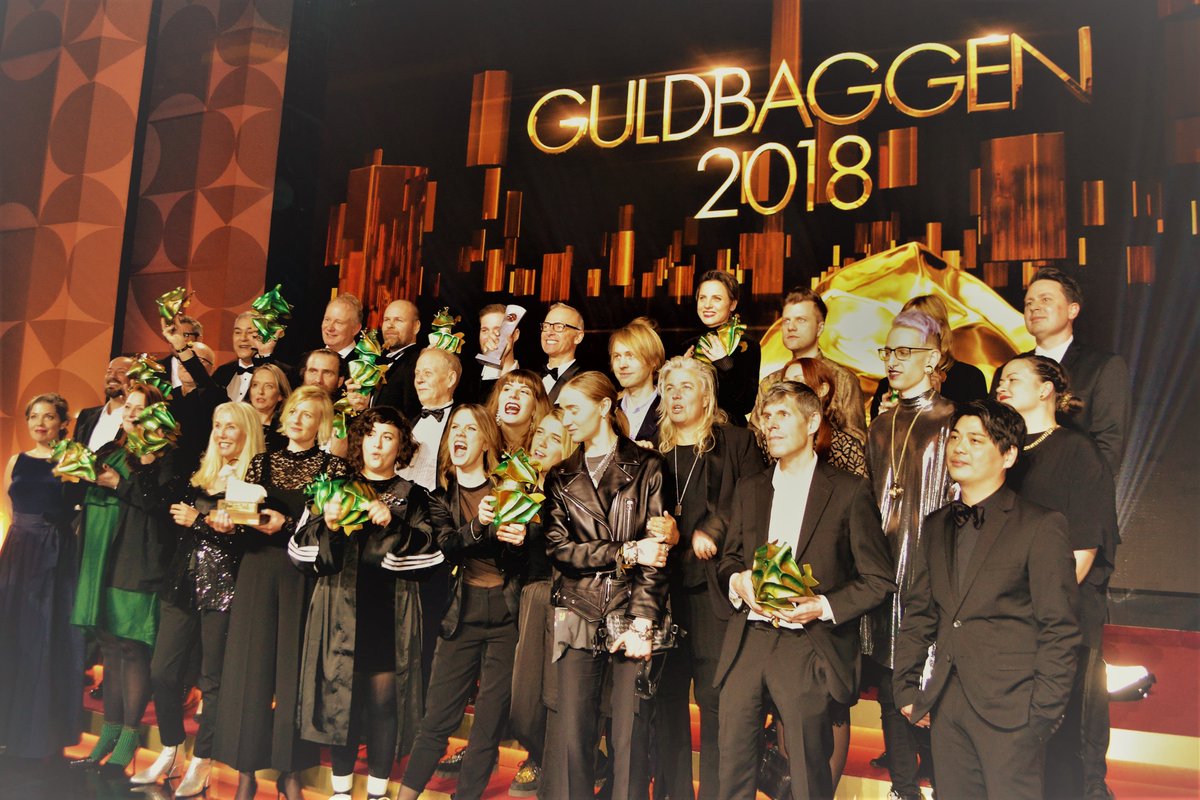 Okay now everybody show us your beetle

Every January, the Swedish Film Institute deliberates over its list of nominations, and in a televised ceremony proudly announces its winners. But instead of being handed some polished ideal of an abstract humanoid figure, they are given a craggy lump of enameled copper that has been hammered by hand into the shape of a rather somewhat crude beetle. It is loud, lumpy, nearly unrecognizable, and it’s the highest honor the Swedish Film Institute can bestow upon their native artisans. It’s the Guldbagge Award, and I can’t help but think that it’s the coolest film award ever made.

The award was designed by Swedish artist Karl Max Pehrson (1921-2005) , a native painter of biomorphic phantasmagoria whose alien plants and lush impossible landscapes rival the Codex Seraphinianus for sheer weirdness. While his paintings won admiration for their fanciful details, his lumpy brutish sculptures were another story. In 1954 a solo show of his work of his sculptures earned some notoriety because critics were turned off by his ‘offensive’ creations.  Rough and abstract, his subjects weren’t plants, but another organism dear to his heart: Beetles.

Pehrson seemed to have created an uncountable number of beetle sculptures, in glass and wire, stone and clay. Even though they’re clearly insects from another world, his years of intense insect-collecting shines through each sculpture. You can nearly see the real coleopterans he used for inspiration, hovering around each sculpture like a ghost image. In fact the Guldbaggen award that Pehrson designed for the SFI is modeled after a specific beetle, Cetonia aurata, the green rose chafer, that it is common during the Summer months in Sweden.

If you visit Stockholm and take the metro, you’re in for a treat; Inside Gärdet station there are several public displays of Pehrson’s beetles, each with made-up Latin names (that you can even barely read in some of Olsson’s photos below) Sadly, since the installation of  “Animals That Don’t Exist” in the late 60’s, some of the beetles have been stolen, and only photographs of those originals remain. No matter what condition, I’d love to view these in person some day.

Even though Pehrson passed away in 2005, his legendary Guldbaggen is still being created, up to 18 a year. Each Guldbaggen is a work of art made by hand, hammered and welded out of copper, then enameled and gilded. Over 300 of these beetles have been awarded since the award’s inception in 1964. And it looks like Sweden has come to really love their strange award. Filmmakers and celebrities gratefully hold up their blocky beetles each year, beaming at the cameras. And then there’s this:

The above performance was for the 2003 Guldbagge Awards. You can bet I’ll be watching this January 27th to see what they do this year!

The Insect Art of John Dilnot

The above work is “Underfoot”, a limited edition screen print by Brighton-based artist John Dilnot. His works are a giddy riot of form and color, whether they’re folded into chaotic garden scenes or cut out and crowded into wooden boxes. Though birds and bad apples are also part of his reportoire, his studio churns out wonderful arrays of moths, beetles, and caterpillars, ready to jump off the watercolor paper even as they sit in ordered rows. Go check out the fun on his website . Here’s just a sample of his entomological printworks.

And last but not least one of his rich art boxes, “Moth Collection”, 2012.  It looks like a vintage children’s book suddenly sublimated into lepidopterans.

infime from Cut And Cook Studio. Can’t get enough of the fantasy macro action! For those with fat bandwidth, see it in fullscreen.

The Insect Art of Ergin İnan

A Thanksgiving trip to Istanbul found me at the Istanbul Museum of Modern Art on a rainy week-day, enjoying an enthralling collection of contemporary artworks. Along with  an absolutely top-notch Design Biennial, the museum had on display a sweeping retrospective of Turkish artwork, nearly all of it unknown to this westerner’s eye. Photography was forbidden in the museum, but for one picture I couldn’t help myself, and you can see why.

Ergin İnan, Self Portrait, 1996. I was totally not allowed to take this picture.

And now I’m glad I did, because Ergin İnan is one majorly prolific insect-obsessed artist. Unfortunately there is little online about İnan in English, and the esoteric discussions in Turkish about his art practice are hopelessly garbled by services like Google Translate. Something about a childhood letter that he drew insects on? A contemplation of transformation of the spirit and mind? I’m left to my own devices on his symbolism, but that won’t stop me from enjoying his paintings.

In İnan’s works, insects seem to hold the key to the gateway to magical worlds beyond, full of incantations, prayers, and poetry. The care and reality in which he renders his invertebrate subjects is often at a deep contrast to his vertebrate ones. His human portraits are ghostly gossamer shades, just as translucent as the prodigious dragonfly wings that sprout from their backs amidst clouds of arabic text. Or else they look like technicolor Bacon-esque smears, their souls made visible only in the form of a resplendent scarab beetle.

I hope to showcase more of İnan’s art in the future, and possibly track down some coherent criticism regarding his themes and feelings towards his favorite subject. But for right now I am just thrilled that a sneaky snapshot in a museum led me to one of Turkey’s foremost insect artists. Güzel!

I haven’t wanted a paper calendar in about a decade, but this beautiful letterpress postcard calendar collection from Benjamin Paul Studio has changed my mind. The prints are detailed, vibrant, and have a lovely cast of invertebrate denizens. (Though I am curious as to what happened in November- did somebody get eaten?) Their website shows where you can purchase them in the US, though I found mine at The Gardener in Berkeley. And remember folks, May is International Fulgoroid Month!

I Believe The Children Are Our Pupae

DonorsChoose is a wonderful site that you will fall in love with. So much of a teacher’s time is spent acquiring the most basic materials for their classrooms. When I think of the mountain of science books and art materials I had at my preschool fingertips, it saddens me to think of all those hungry young minds out there without a single extra insect textbook, or hand lens, or materials to learn about basic insect anatomy.

The ever-awesome Bug Girl has put together a page just for Bug Bloggers, full of classrooms laying out what science projects they need. Have a look, and help wake up kids to the larger world of insects. An Oakland classroom looking for science art materials? Don’t Mind If I Do(nate)! And if for some reason you’re more into plants or planets, there’s a whole set of blogger-curated group pages. Plus If you use the match code “SCIENCE” this week, all donations will be matched! Or find your own thing to donate to! A little or a lot, it goes straight to the schools, and it’s mighty easy.

Donating certainly helped me relax a bit. No matter what, some kid is going to get a handle on what insects are, and that makes me hopeful for our future. A future filled with pupae.

No sooner do I post about butterfly psychopomps, than one comes straight through my door! My friend and prodigious printmaker Kristian Johnson Michiels gave me a hand-watercolored print of her beautiful super-detailed Spirit Butterfly, a super honor. My camera cannot do justice to the fierce color depth or glinting gold leaf curling around the wings and clouds. So glad to have another insect-artwork from a dear friend! Which reminds me, I should share the other insect works I’ve been gifted over the years..

Kirk Maxson‘s hallway installation of pinned paper butterflies is now gone from San Francisco’s Eli Ridgway gallery, but hopefully he has more butterfly-installations planned for future exhibitions. Of all the Cut Paper Swarms of Butterflies that I’ve seen, his is the most diverse in species, and a great combination of light arrangement and somber content.

Butterflies are perhaps the biggest winners in the insect public relations contest, rivaling honeybees for instant connection and fondness in the heart of even the most committed entophobe. They move slowly, wear bright colors, and don’t bite or invade our homes or parasitize our young. Their scale-covered wings and gentle demeanor give them a free pass among humanity.

But in ancient cultures worldwide, butterflies have had a slightly more ambiguous relationship. Ancient Greeks, Aztecs and Aboriginal Australians are just a few of the many cultures who considered butterflies to be creatures associated with the dead, either escorting lost souls, or the departed themselves. Though it’s a fearful topic, involving lepidopterans with death is also an association of hope. Who wouldn’t want to envision the end of life’s struggle and toil as one lived in slow serene flight?

No better and more poignant way to depict this association than with Kirk Maxson’s installation ‘War’. Pages of war, violence, and anguish, pulled from color travel magazines, are cut and segmented into discrete butterfly silhouettes, whose flocking forms retain the original image. The various kinds of butterfly species are stunning- very few are repeated! Io moths, monarchs, skippers and blues all clustered in the halls of the gallery, allowing the eye to assemble a picture whose participants may be long dead themselves. Though we are implicated in viewing dispassionately such images through the safety of National Geographics, the butterflies are themselves blameless. They are as ever quiet couriers, dispersing strife into softness by the slow beat of their wings.

A stunning 20-second exposure photograph of moths spiraling towards the light in the Ontario darkness by Steve Irvine. Check out the full beauty of this image at the National Geographic site. It’s like a lepidopteran cloud chamber of moth particles!

Visitors to the Seattle Space Needle will get a special arachnid surprise when they look out over the observation platform! Two humongous harvestman spiders have been painted on the roof of the Seattle Center Armory by scientific illustrator and muralist Marlin Peterson. From his website it’s clear that he has a soft spot for arachnids of all kinds.  What a treat to get to celebrate such graceful and delicate creatures on such a colossal scale! As Marlin tells it,

“My mural will be 2 huge, huge Opiliones arachnids hanging out like we always see them, casually and vertically on a wall or roof.  They will be approximately 1 zillion times life-size, depending on the site I get.  I chose them because of the cool way their long legs cast shadows, and that they are not threatening- they don’t have venom, fangs, and thus don’t bite humans.  They are a familiar sight here in Seattle and contrary to popular belief, they are not even spiders!”

To make a trompe l’oeil with so much shadow-work and at such a size just staggers my brain cells. It’s truly an inspired mural, and it was made possible thanks to a Washington arts grant. Last time I visited Seattle I skipped going up the Space Needle.. but that was before it was surrounded by giant invertebrates. Now I have to go!