The Insect Book of Utamaro

Whilst hunting down information online (for an entirely different post on Japanese insect art), I found several delicately beautiful images by the famed ukiyo-e artist Utamaro, all tantalizingly referred to as pages from a 1788 work entitled “Picture Book of Selected Insects With Crazy Poems“: 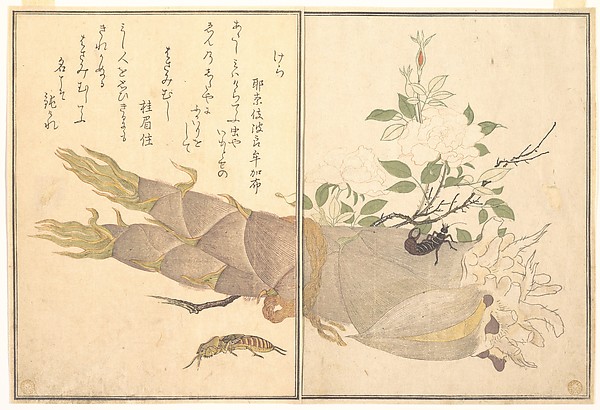 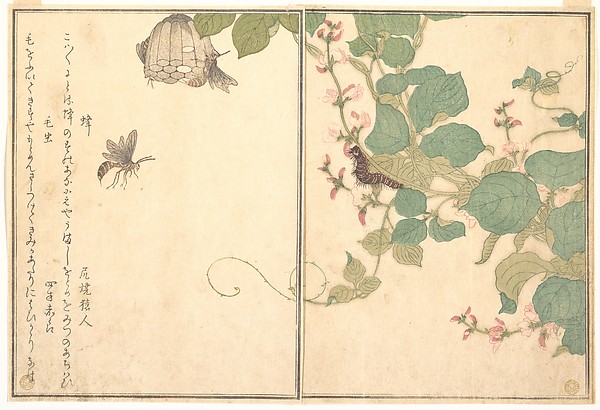 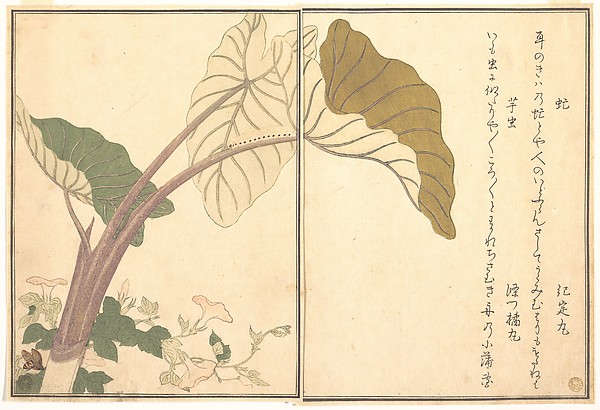 Well, insects and crazy poetry go together like insects and crazy bloggers, so I was not content to rest once I found out such a book existed. Frustratingly, though many museum databases have images to view online, none of them provide any insight into the “crazy” poems. Thankfully the Fitzwilliam Museum in Cambridge has the entire 2-volume set translated. The site’s clever interactivity also gives context to the many allusions and deft wordplay packed into each poem . Plus it has the 2 other books in the series, which deal with crazy bird poetry and crazy seashell poetry.

The Fitzwilliam site also calls the book by its actual name, Ehon Mushi Erami, which translates as Picture Book of Crawling Creatures (though mushi is often used for insects, it actually is a catch-all name for things what crawl, which is why frogs and lizards are included).

So where did the ‘crazy’ come from? Turns out the book is a collaboration of a group of comic poets, a bunch of wags who would get together and compose kyōka, which means ‘light verse’, or ‘mad song’. Kyōka was mostly a parody of serious short-form poetry. Utamaro’s images in the books might be lyrical, but the poetry is all about love, lust, and silly double entendres.

Just how crazy are they? Well here’s a couple of my favorites, courtesy of translator John T. Carpenter.

Though by name
you are the ‘scissors insect’
when you try to cut off
ties with a lover of the past
you cannot sever cleanly.
–Katsura no Mayuzumi

If you no longer love me,
then leave, like a dragonfly
that wants to fly away,
yet I won’t let you escape
from my long sticky pole!
–Ichifuji Nitaka

Perhaps it would help to mention that, er,  ‘long sticky pole’ refers to the long sticks used to catch (and eat) dragonflies and other insects? Actually no matter, it’s still kinda naughty.

Heck. even the furtive bagworm can’t escape from being accused of amorous intentions as it pupates:

On a pitch-dark night,
when one can’t even guess
which way is East or West,
the bagworm hides its lust
in a cloak of invisibility
–Tachibana no Uranari

As you can see, they’re all pretty silly, though ‘crazy’ might be a stretch for today’s reader. I’m sure they caused a stir in the late 1700’s though!  I recommend paging through the entire set- the woodblock prints are elegant scenes, with the celebrated invertebrate subjects crawling through the greenery, secretly looking for love.

3 Responses to The Insect Book of Utamaro