Bethany Krull and the Surrogate World

There’s so much good stuff about Sculptor Bethany Krull’s works that I will have to restrain myself from displaying them all.  Krull’s seeds, insects, and invertebrates are more than just a celebration of the beautiful forms found in nature, but also a sometimes unflinching look at humanity’s engagement with other life forms we share our space with, and how casually we alter their existence.

Her most recent body of work is called Dominance and Affection, combining captivity, domesticity, and isolation from the natural world in a series of stark works in porcelain, wood, and bronze. Beetles are turned into beasts of burden, Mice and monkeys clutch to surrogate mothers of cloth and wire, and desperately lonely hermit crabs huddle in endearingly appointed man-made shells.

While using shackled parrots and caged cats may tug at the heartstrings of many people who are attracted to the possible plights of our dear pets, it is the prevalent use of invertebrates that is most affecting. Hermit crabs are callously termed ‘starter pets’ by the pet industry, and are viewed as disposable. Crickets, bred for centuries in Asia as pets, chirp mournfully in cages, and are forced to fight, much like roosters, in arenas. Is their plight any less tragic than chickens? At what phylogenetic distance does our empathy for animals decay? In Krull’s works, that long rope is yanked short by her endearing portrayals of spiders, wasps, and beetles. Realized in glowing white porcelain, they take on a nearly cuddly appearance while losing none of their anatomy or their pathos.

“We have turned wild animals into companions, genetically sculpting them into sweeter, cuter, less dangerous versions of themselves,” Krull states,  “We shower our pets with love at the same time we cage and contain them and it is this affection contradicting complete control that I am interested in illustrating in my work. For no amount of love lavished upon these creatures will erase the fact that the success of the relationship lies in our complete domination over all aspects of their existence.” 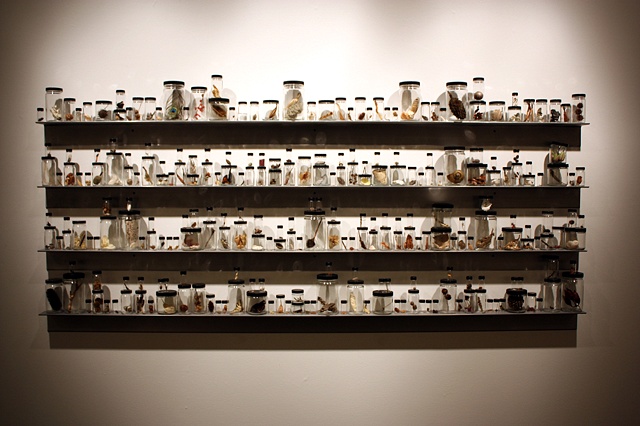 For the naturalist, this paradox hits home sharply.  Almost any lover of nature and its creatures has at one point in time captured and kept an animal. I myself remember fondly the first hermit crabs I cared for as a child, and observing them surely helped kindle within me a fascination for the invertebrate world. They lived out their fascinating lives, however, far from their seashore home, with no chance to return. Krull’s strong works remind me of Bertram Chandler’s 1963 short story, “The Cage”, where a group of stranded astronauts are captured and put into a zoo by non-humanoid aliens.  The humans finally demonstrate their sentience to their captors in an unsettling way, they themselves trap and keep a small mouse.  “Only rational beings,” said the alien,  “put other beings in cages.”