Insects At The Movies: Joe’s Apartment

Often shown as part of MTV’s legendary Liquid Television, John Payson directed this this short film gem in 1992 about poor slob Joe and the thousands of cockroaches he shares an apartment with. It’s great low-budget lunacy, and obviously one of my favorite MTV shorts. Here it is in its entirety:

For some gloriously demented reason, Geffen Pictures decided to give Payson the green light to turn Joe’s Apartment into a feature film years later. While some human-based parts of the movie drag, it’s heaven for anybody who wants to see a swarm of roaches dance, sing, and save the day!

Though Jerry O’Connell does a fine job as comedic naïf Joe, from the opening shot it’s clear that roaches are the real stars of the film. Replacing the stop-motion from the original short are swarms of CGI roaches expertly animated by Blue Sky Productions, as well as 5,000 actual live roaches. This being an MTV movie, the fun-loving roaches are nearly all represented as young males on a nonstop frat party, and everybody plays music. But if you can get past the juvenile boy-humor, it’s worth it to see blattids take center stage, and not merely as objects of disgust (though they revel in that too). The animated roaches act like tiny humans, but they’re entirely anatomically correct, from clypeus to cerci. Here’s the gang performing a little romantic love song for Joe. 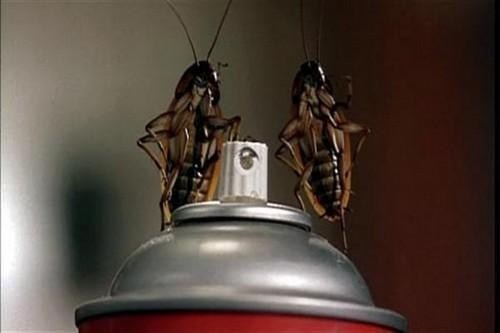 Ralph & Rodney, kings of all they survey

There’s some standard plot of an evil senator who wants to destroy the apartment, and his daughter who plays the love interest, or something. But who cares? Back to the blattids! They turn the ruined apartment into a garden and give Joe the deed to the property, all while surfing a drainpipe. And the final gospel number when they reach the ‘promised land’ of the ultimate apartment, just has to be seen to be believed. Rare and brave is the movie that has a happy young couple making out amidst a sea of skittering roaches.

One final note: back in 1996 when the film came out, I remembered an anecdote that the American Humane Association was on hand to assure the safe treatment of all 5,000 of the live cockroach co-stars.  Sure enough, I recently found this review of the movie on the AHA website database, detailing some of the film’s use of animal slight-of-hand, along with lovely stories of O’Connell pulling live roaches out of his mouth when the cameras stopped rolling. That’s some serious dedication to cockroach welfare.